Directors Dorota Kobiela and Hugh Welchman spoke to The Mary Sue about their ambitious film, which brings to life the artwork of Vincent Van Gogh. They spoke about the animation process and the continued impact of the artist’s work, “The idea was always to bring Van Gogh’s portraits to life to tell his story. There are three major feature film biopics that focus on Vincent, so we felt this approach had been done. There are many conflicting views about Vincent, and still many mysteries despite over 100 years of dedicated scholarship, so conflicting views from the people around him seemed a promising dramatic approach.

Unfortunately, it is often only after someone’s tragic death that people tend to ask questions about the person, and want to know who that person was, and what went wrong for them. Who Vincent was and what went wrong for him in spite of his big heart, prodigious talent, and love for the world was something that fascinated us, and we thought it would fascinate others.

We used digital painting, VFX techniques, computer modelling and animation, and live action shooting in various proportions to create the references for the painters to animate. In many instances we couldn’t provide references, and the painters had to simply imagine them into life through the movement of brushstrokes.” 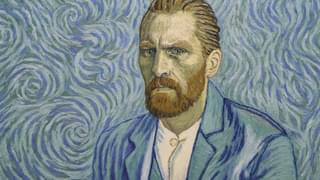 Dolores Huerta is among the most important, yet least known, activists in American history.