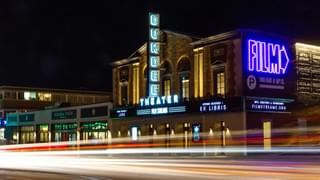 Movie showtimes begin late afternoon on Tuesday through Friday, and before noon on Saturday and Sunday. Our Box Office opens 30 minutes before the day's first showtime.

We are closed to the public on Mondays. All four of our screens at both locations will now be available for private theater rentals every Monday in 2023!

Coffee, breakfast, lunch, dinner by candlelight, and weekend brunch. Our cafe partner at the Dundee Theater does it all, and does it great. Indoor counter service, take out, and online ordering available.

Bicycle parking is available on site. The Dundee is conveniently located near the ORBT stations at 49th & Dodge. We offer discounted tickets ($9) for those traveling to the theater by bike or public transportation.

Buy tickets online (no fees!) or at the Box Office. Unless otherwise noted, prices for regular movie tickets are:

Tickets may be refunded up to one week prior to the screening/event date. Tickets may be exchanged for another program up to 24 hours prior to the screening start time. Within 24 hours of screening/event, no refunds or exchanges will be accepted. In the event that Film Streams needs to cancel a showing, we offer ticket exchanges or complimentary passes for any of our regularly priced programming. 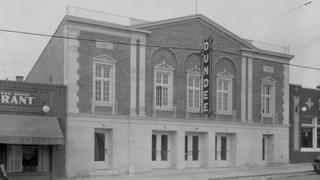 About the Dundee Theater

The Dundee Theater first opened in December 1925, within what was then the suburban Omaha community of Dundee. Four years later, sound technology arrived, marking the first of many changes to the cinema through the years.

At times, the Dundee served as a venue for popular Hollywood fare, including its historic 118-week run of The Sound of Music in the mid-1960s. At others, it operated as an art house, introducing new independents and international films to local audiences.

In 2017, following a transformational gift of property from The Sherwood Foundation that saved the then-shuttered Dundee Theater, Film Streams took ownership of the historic cinema and began a major renovation to secure its future.

Improvements and additions include a new, safer entrance on the north side of the building, a larger lobby/community space shared with Lola's Cafe, and a brand new screening room, the 25-seat Linder Microcinema, that will feature more experimental and challenging art films while also serving as the home for Film Streams Courses.

The Banshees of Inisherin